It was an early Sunday morning in July.  Most of the family was still in bed.  I was on the computer Googling “names meaning eagle” and hoping no one would come down the stairs and see what I was doing.

I felt rather silly, looking up baby names.  I was 41.  I already had 9 beautiful children.  I had no reason to think that I would ever be blessed with another one.  I would say from time to time, “I think I would like to have a baby in my 40s.”  My husband would always respond, “You’re crazy.”

I felt a little crazy just then, but I felt compelled to do it.  I just had to know what names were out there that meant “eagle.”  Over the past few years God had used many amazing encounters to convince me that I was meant to be an eagle.  I was beginning to let go of who I thought I was (a quiet girl who was deathly afraid of heights) and believe who God made me to be.

I found many names that fit the bill.  However, I needed an “A” name for a girl and a “C” name for a boy to follow the pattern of all our other children.  I could find no suitable boy name, try as I might!  A girl’s name struck me as though it were jumping off the computer screen .

Hebrew from Ariel – lion or lioness of God

Teutonic – intelligence of an eagle

Hawaiian – hawk of royalty, bird of heaven, to soar like an eagle

A few months later, in December, I found that I was pregnant.  The revelation came at a time I didn’t expect.  It didn’t seem like the right time for another baby.  But …perhaps this dream in my heart had been a dream in God’s heart all along.  Perhaps now was THE TIME!

My oldest daughter, Areli, loved the girl’s name I had found!  The boys did not like it, mostly because they wanted the baby to be a boy.  Chris liked the named “Aria” but wasn’t sure about “Iolani.”  It was too hard for him to remember and pronounce correctly, and he thought it would difficult for others as well.

I checked out a bunch of books from the library about Hawaii since Areli was planning on going there for school in the next year or so.  I discovered that there is an Iolani Palace in Hawaii, the only royal palace in the United States.  That settled it.  “Iolani” was THE middle name!

I was excited but told myself that this baby could easily be a boy.  Soon sickness and other pregnancy discomforts (that I had never experienced before) came upon me.  The dream of “Aria Iolani” was still a lovely thought, but it was overpowered by the thoughts of a victim pleading for release from her prison.  I understood that all that was going on in my spirit was being experienced by my baby’s spirit as well.  I tried to be thankful and upbeat.  I tried to speak over my baby love and peace and truth.  Half the time I doubted the truth myself.  That God really loved me and that someday I would feel good again.

Many fears started to plague my mind.  What if there was something wrong with this baby?  What if there was something wrong with my body?  And the worst fear of all, what if this child had a chromosomal abnormality like Ashlyn had?  I love Ashlyn and I am still amazed that God would trust us with such a special child.  Still, I always thought that having two special children would be absolutely too much to handle, and I would break under the strain of it.  With each pregnancy there has been a small chance, and each time this fear rears its ugly head.  This pregnancy the fear was worse than usual, almost suffocating me at times.

I didn’t go to church for two months.  Finally I was feeling well enough to go to a Sunday morning service.  As I entered the balcony of the sanctuary, I heard the Helsers leading worship.  I felt the sweet presence of God, and I longed to linger there forever!  They were singing, “Mt. Zion.”

We have come to Mount Zion

City of the living God

By his blood we have come

I felt God’s presence.  I felt peace and joy.  I felt safety and security.  The fears dissipated.  Hope started rising.  This is where I should have been living this whole time.  This is where I wanted my baby to live, even in the womb.  I felt sad that I had been such a bad mother so far.  I had tried to abide in the presence of God in my own home.  But most of the time I just felt sick and discouraged.

Here at church I could feel His presence, as though Mount Zion was a reality I was dwelling in. The song continued:

Thousands of angels dance around his throne

And elders throw their crowns down

As all of heaven sings out

“Baby, this is where you are to live all the time,” I told the precious little one.

I heard a sweet little girl’s voice say these words.  At least I thought it sounded like a girl. I knew it was my baby.  This was very unexpected and unusual.  It wasn’t said in a sassy voice as if to imply that I was being dumb for thinking my baby didn’t already know this.

It was said in a comforting voice as if to say, “Mama, you worry too much.  I am just fine.  I just recently came to you from heaven.  I could see those angels in person, and I can see them still.  I am still surrounded by His presence.”

I felt more at peace than I had in a long time.  My baby was more aware of spiritual realities than I was.  She was most definitely an amazing child.  I began to remember all the fears I had confronted during previous pregnancies.  One by one those fears had fallen by the wayside, replace by peace.  Almost across board just the opposite had proven to be true.

I didn’t need to worry about this baby’s health, well-being, or intelligence.  She (or possibly he, I had to remind myself) was extraordinary…a super baby!  She (or he) had just spoken to me from the womb for goodness sake!

On March 30th we had an ultrasound that revealed a perfect and beautiful baby girl!  My dream was growing inside me.

About four weeks before my due date, Aria dropped.  She was sitting low and I was uncomfortable.

“At least she is head down and in the right position.  She is getting ready to be born, and it won’t be long now,” I thought.

Each week she dropped a little lower.  Each week I was more uncomfortable.  I kept having signs that labor was near, but no real labor would come.  The last week, each day felt exponentially worse than the day before.  My due date, August 16th came and went, and Aria became my first baby that was actually late.

Finally my water broke the night of August 17th.  The next day labor still had not started, but my homebirth midwife came over to check on me.  I was already dilated to 5 cm and Aria was at +3 station.  The midwife said that babies normally are not that low unless the mom was already in labor.  We both thought that once labor started, Aria would be born quickly.  We were wrong.

Labor finally began around 3pm on August 18th but it progressed very slowly.  I was listening to worship music, scriptures, and birth affirmations.  I was enjoying God’s presence.  He was speaking to me and showing me visions of Himself.   Before I knew it, it was evening.  I didn’t feel like I was in transition even though I was dilated to 10.

Then it got difficult.  I never really had a difficult labor, so it was a new experience.  Aria was so close to being born, yet she wasn’t being born!  I am sure it was difficult for her too, but her heart-rate remained steady.  Finally after an ambulance ride, an epidural, Pitocin, and some sleep; Aria supernaturally came into the outside world at 2:33 am on August 19, 2018.  I felt no pain and consciously did nothing at all.

I simply slept and prayed, “Jesus, you do this because I can’t.”

I woke up to the slightest bit of pressure.  My midwife looked under my covers to see that Aria’s head was crowning!

She was born quickly and placed in my arms.  The rest of the room faded away.  There was only my baby.

She was beautiful and peaceful.  I noticed her eyes first.  They were open wide and moving slowly back and forth, scanning and taking it all in.  To me they looked like the eyes of an eagle.

She is now six weeks old.  Aria had not been as sleepy as my other newborns.  She is more alert and her eyes are always looking. 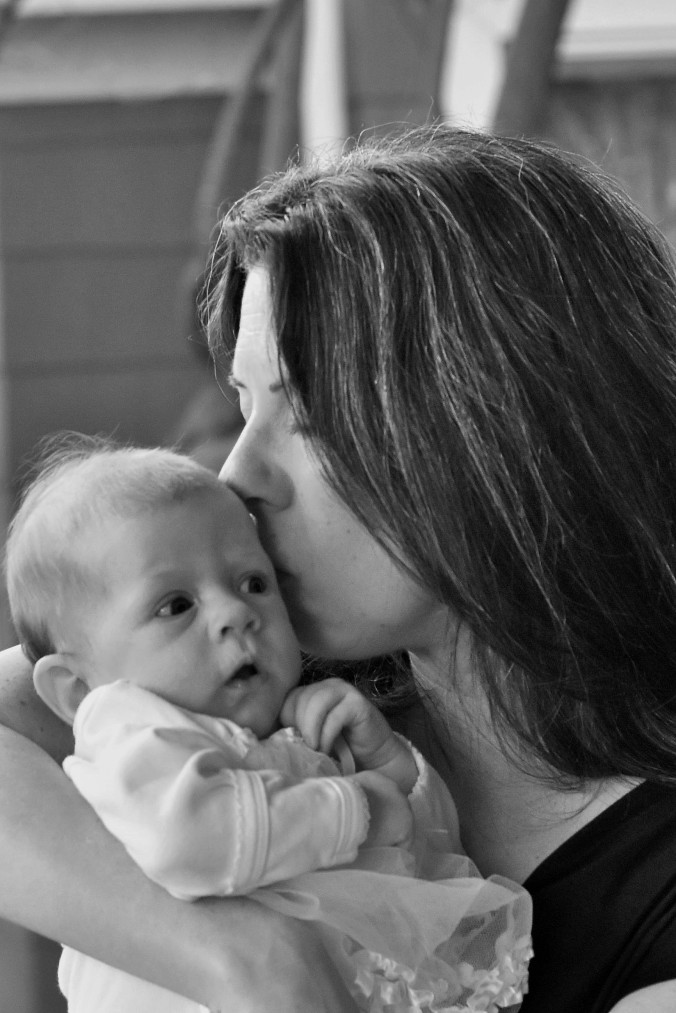 The midwife saw her at three weeks and said, “She seems more like a 6 week old that a 3 week old.”  At 3 ½ weeks she began to really look at our faces and smile! The most adorable smile.

Not all is prefect of course.  My recovery had been much slower this time.  Aria finds it hard to just fall asleep, and she spends a good amount of time crying when she is tired.  She also had the worst case of thrush I have ever seen.  Then came the baby acne.

But when I nurse her and look at her baby face, I am so thankful for the chance to have her as a daughter, my 10th child.

What a rare and precious jewel.  When I prayed for her during my difficult pregnancy, God showed me so clearly that Aria is vitally important – to this family, to this world, and to eternity.  She was not an extra baby or an optional baby.  She NEEDED to be here.  Just like every single baby ever to be conceived.

Of course to me Aria is amazing!  Brilliant, observant, and born to fly.

6 thoughts on “The Naming of Aria Iolani”