If my grandmother, La Vera Gisselman were still on this earth, she would be 100 years old today.  She was an extraordinary woman, and I remember her with such fondness.

She grew up in Wisconsin.  Her small family lived in the second story above a store that they owned.  She was full of love and admiration for her sainted mother, Amelia.  She had much respect for her father, John, although she described him as being strict and favoring her younger brother over her.  She told me her father was a very handsome man, always attracting the attention of the ladies.  Yet he had a certain smell about him, being very opposed to the overuse of precious and expensive water.  (La Vera was one of the most cleanly people I have ever known, almost to a fault.  As a child, I would wait on her heels and beg her to play with me.  Yet, she could not settle down to play a game or read a comic book until she felt that she had sufficiently cleaned my parents house.  This included taking the mattress off of my bed and vacuuming underneath it!)  Well, as a young woman, she described sneaking around when her father wasn’t home, filling up the wash tub with the rationed water and taking many forbidden baths.

When she was 16 years old, she met the love of her life, Harold Gisselman, at the ice skating rink.  He was immediately taken with her and offered to walk her half of the way home.

She thought to herself, “What kind of a guy is this, that he would only walk me part of the way!”

He ended up walking her the entire way to her front door, and it sounded like they were inseparable after that!  He was 20, so he had to wait for La Vera to grow up a bit before they could think about marriage.  Yet, they waited more than 10 years before they tied the knot.  In the frugal and patient way of their generation, they purchased a plot of land and had a house built before they got married.  (I remember looking at pictures of the basement being dug and the piles and piles of rocks that were pulled out of the ground.  Some of those rocks were used by Harold’s father to build a retaining wall in the back yard.  Many changes occurred to the house and the yard over the years, but 921 Humboldt Ave. remained their beloved home for all of their 50 plus years of marriage.  I have such wonderful memories of that little two bedroom, always clean and orderly, always meticulously maintained.  I remember picking cucumbers in the perfect, weedless garden.  I recall many neighbors and friends commenting on how the yard, bordered and overflowing with plants and flowers, was the prettiest one in Wausau.  Whenever an unusually cool breeze blows through Pennsylvania, I am taken back to those cool Wisconsin summers.  Whenever our radiators kick on that first cold day of fall, I am reminded of the smell of Grammy and Papa’s radiators that they had to turn on even in the summer!) 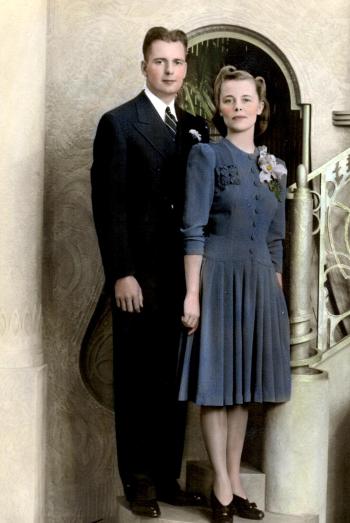 Harold and La Vera Gisselman on their wedding day

They honeymooned in Chicago to pick out some furniture for their new home. When they returned to Wausau, they separated to continue living with their own parents until their home was completed.  Harold was the youngest of his mother’s four boys, and Anna always told him that when he moved out, she would just die.  The day he moved into his own home, which was just up the street from his mother’s home, she did pass away.  Much sorrow and joy were woven together in those early years.

Grammy told me that one day Harold was requested to report for duty.  It was WWII, and he had received a summons, but there was a possibility that he could be sent right back home again. Grammy passed the long hours waiting for him to return home by scrubbing every inch of her home.  Then she received a call.  He would not be returning but would be entering the Army Air Corp!  He went to an army base in St Louis, Missouri.  They discovered that he was very good at typing, so the army, in their wisdom, decided that he could best serve his country by doing office work in the states.  He was never sent over seas to fight, and I was always so thankful for that.  La Vera was able to visit him in St. Louis, and she became pregnant with their first and only child, my mother!  How very important that child was!

La Vera had to spend most of her pregnancy alone, although she did have the help and company of her mother.  When she told her father-in-law, Erik, that he was going to be a grandfather, he would walk up the street to help her as well.

The time came for her to give birth.  She entered the hospital and they put her to sleep.  She doesn’t remember any of the birth!  (She would become very uncomfortable when I would broach the topic of my natural childbirth experiences.  She preferred to stay in the dark about the whole mysterious affair.)  Harold received some leave and returned to see his baby girl!

After his time in the Army, Harold was hired as a bank teller.  He worked his way up the banking ladder until he was eventually the bank president.  Everyone called him Chick, and he was known and loved by everyone at the bank and most everyone in town.  He was an honest and intelligent man, always ready with a joke and a smile.  Years and years after his retirement and even years after his death in 1994, I still heard people around town talk about him with respect and admiration.

La Vera got a job as a kindergarten teacher’s assistant at Franklin Elementary.  Then she was the secretary at Horace Mann Junior High School and worked there for many years.  She was wonderful with children.  She gave me a box full of years and years worth of crafty invitations she helped to make, promoting some sort of school event.  She would often be a part of the school’s variety show in which she and Harold (along with many others) would deck themselves out in various costumes and perform skits.

Once they both retired, they would spend their winters in Florida and Arizona and their summers gardening and visiting their two beloved grandchildren (myself and my brother Jason) in Pennsylvania.  La Vera despised the heat and humidity of PA.  She would end up playing games with us in our cool basement to find relief.  We would also go to visit them in Wisconsin for 2-4 weeks in the summer.  Oh the fun we had playing at Marathon Park, hiking on Rib Mountain or the Eau Claire Dells, and visiting the cottage up north. We would swim in the frigid water until our quivering lips turned purple.  Once we all took a trip to Yellowstone National Park.  It was one of the best times of my childhood!

My Papa passed away the night that I graduated from High School.  La Vera was devastated and heart-broken.  He had prepared her for his death, and she knew how to take care of herself.  She was strong and self-determined.  One of her most memorable character traits was that she ALWAYS knew the right thing to do in EVERY situation, and she NEVER hesitated to speak her mind.  She could be taken as rather prideful and bossy at times, yet to me, that was just Grammy.

Several years passed and Grammy moved herself into a retirement community, selling her beloved home and going through all of her belongings.  Years after that she moved herself into a new retirement community, because it had a balcony off the living room that she liked better.  She loved that place and never wanted to leave.  She kept herself busy with cribbage games and a string of adoring boyfriends, always much younger that she was.  She lived independently up until two months before her death at age 96.  She was a marvel and a wonder to all who met her!  Her secrets to long life and vitality?  Exercise, fresh air, gardening, and a table-spoon of vinegar and black strap molasses everyday.  Her father, who died in his own home at age 96, swore by his vinegar and honey, and she carried on that tradition with a twist.

One point that Grammy was rather adamant about over the years was that I should not be a “baby making machine”, as she put it.  She was overjoyed with the first few children we had.  Then her excitement waned with the next few.  Somewhere around the 6th child, she acted annoyed when I announced a new pregnancy.  Pretty soon I was very hesitant to even tell her that I was pregnant again, almost wishing that I could assure her that we would absolutely have no more children and gain back her approval.  Her approval was always something that I highly coveted.  Woe to the person who had lost it!  Yet I knew that God had more precious babies for me, whether Grammy liked it or not!

In her final years, La Vera appeared to become less controlling and more accepting of others.  I had the privilege of spending the last week of her life by her side. She had a stroke and was no longer capable of making decisions on her own.  Chris and I traveled to Wisconsin and moved her into a memory care facility.  She was the most talkative, most opinionated, and spunkiest resident in the entire place.  She could hold the most lucid conversations, and a few times Chris and I thought we were making a horrible mistake by taking away her freedom, her apartment, and her car.  Yet the next moment she would think that Chris was a nurse and that another resident, Leonard, was actually her boyfriend, Harry.  She had the most hilarious conversations with Leonard, still believing that he was Harry, even after he refuted that fact in many ways.  Yet Leonard was smiling the whole time as though he didn’t mind the thought of being her boyfriend.

She passed peacefully in her sleep on February 4, 2011.  I was hard to say goodbye, but I was thankful that she didn’t have to live very long with dementia.

Later, in her belongings I found at least four typed note cards listing the names and birth dates of all her great-grandchildren (including Jason’s two children), as though she was afraid that she would forget one of them.  I also found a precious little bundle wrapped in white tissue paper.  It was a group of seven silver angels, one for each one of my children that I had at that time.  Each one was inscribed with the child’s name and inset with their birthstone.  Each great-grandchild was precious to her…I could see that clearly.  Now that she is on the other side of eternity, I know they are even more precious in her eyes.  I know that she is cheering me on as I am expecting our ninth little one in April.  She can now see into the fathomless depths of time; generation after generation, thousands of years upon thousands of years.  Every good thing my children accomplish during their lifetimes is part of HER legacy!  Their imprint on history is also HER imprint on history!  And their love of humanity and their love for God add to HER eternal bliss.

I love you Grammy!  I can hardly wait to see you again!