I conducted a survey on Facebook.  I asked my friends who supported Donald Trump to tell me why.  I received 21 replies which contained 35 reasons.  I have simplified the answers and ranked them by popularity.

It is easy to see why Trump has been meeting enthusiastic crowds of thousands of people everywhere he goes. If this list seems too good to be true, our you just love to research and discover facts for yourself, I have two wonderfully thorough and documented articles for you.

The TRUMP ADMINISTRATION ACCOMPLISHMENTS
on Life, Family, and Religious Freedom
An Overview of events occurring 2017-2020

I am so excited to introduce my second guest blogger, Patricia Leach.  She was one of the first to show love to a scared and shy teenager when I first visited Life Center (Word Fellowship at that time) back in 1989.  She became my pastor and my role model as I watched her live a life of integrity and compassion.  Now I am honored to call her my dear, dear friend!  She participated in the March for Life on January 27th and here is her story.

Many years ago I walked with my eldest son, then only four years old, in a local pro-life parade sponsored by one of our community’s pregnancy centers. David’s tiny hands clenched the cardboard sign that together we had crayoned in shades of blue and pink. He was focused on our course and held his Walk for Life placard with bold resolve. Beside us, my husband with baby #2 in tow added the exclamation point that we are a family who stand for life.

In preparation for the event and in the simplest of terms, I had explained to David what it meant for a woman to choose to have an abortion. His cherubic face tightened in disbelief that such a procedure could be performed upon a baby living inside its mommy’s ‘tummy’. Far too young to grasp the issue’s many ramifications, his incredulous expression still captured the dreadfulness of this senseless practice.

What began as an impulse born from such a conviction became a reality when I decided to attend the 44th March for Life in Washington, D.C. My involvement in the pro-life movement has included stints of red-taped-LIFE silent protests on the state capitol stairs, an annual Mother’s Day fundraiser – the Baby Bottle Blast – and for many years, our own personal monthly contribution to the same local pregnancy center. But to join the national gathering? I often watched the previous marches from the comfort of my home, admiring those braving the elements while adding my amen to impassioned speeches and faith-filled prayers. Somehow this year was different. I had to go. 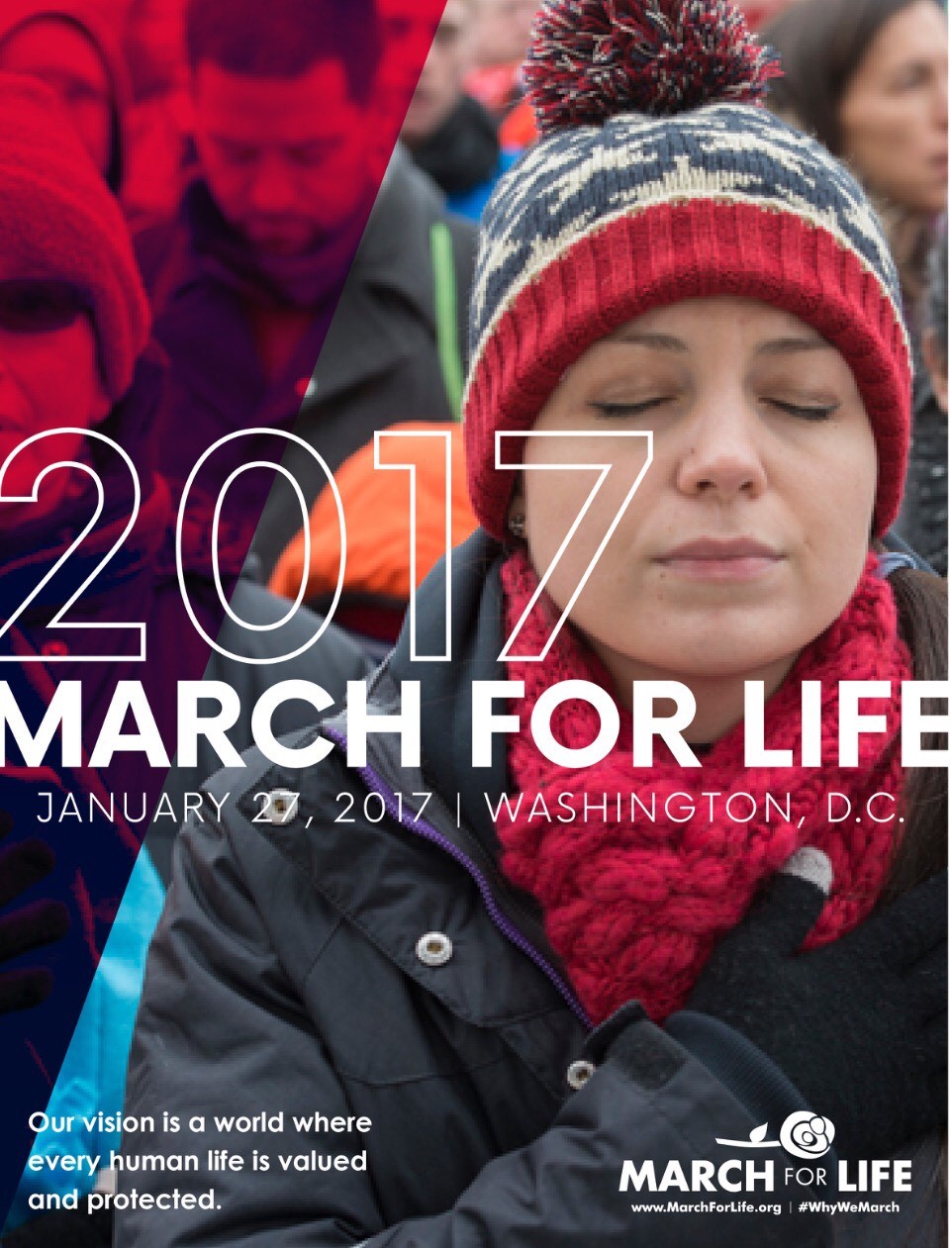 Maybe, too, it was the recent footage of an earlier march that week that motivated me. Other women had descended on Washington for what appeared to be a variety of causes. And though I support their cry for equal and respectful treatment, much of the rhetoric fell flat to me against the backdrop of anger and vulgarity. Their assembling also included an unwillingness to embrace women with my pro-life viewpoint. What was deemed ‘The Women’s March’ lacked the very openness and acceptance they purported. In many ways, they did not stand for me. So early the day of the March for Life, I headed south with a friend to join what turned out to be hundreds of thousands and show my support. In going, I didn’t need anyone to stand for me;

I wanted to make a stand.

Upon arriving at the National Mall, we caught our first glimpses of the day. The crispness in the air hinted to the clarity of vision we would share with fellow marchers. Unfurled in the distance surrounding the Washington Monument, a circle of Stars and Stripes silently witnessed a cause rallying with pride. 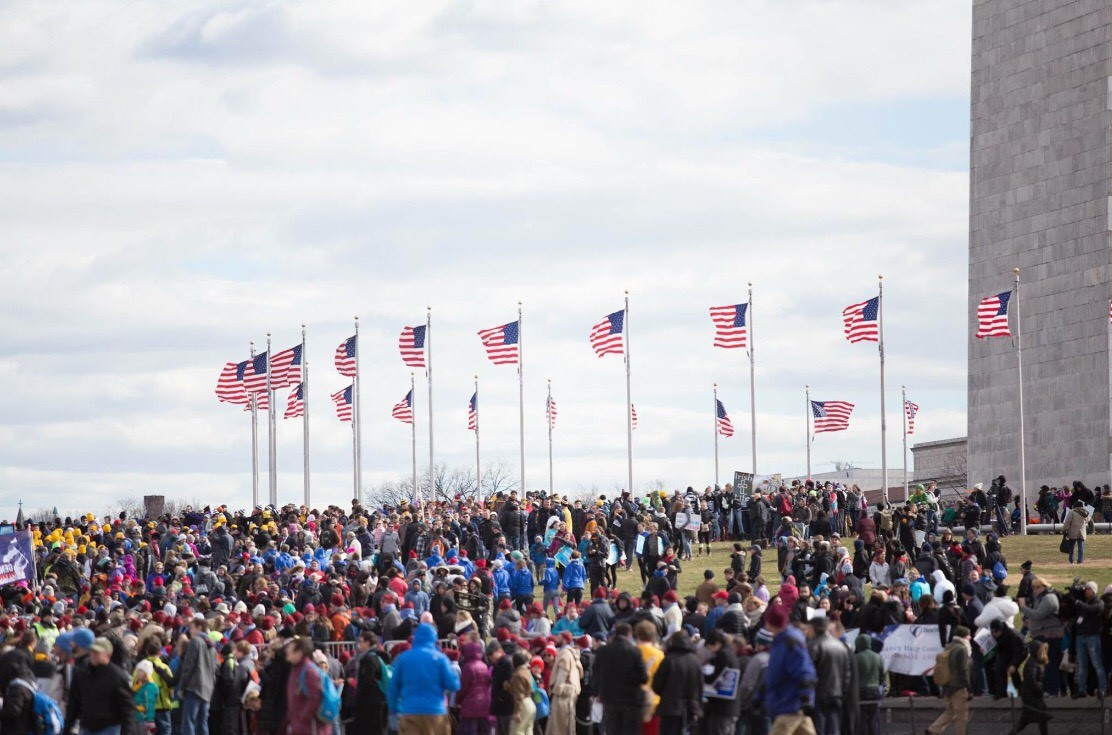 Our feet fell in step upon well-manicured grounds, as slowly we made our way through the security checkpoint and secured a spot to hear the presentations. Chants of ‘We are the pro-life generation’ earmarked this vocal vigil which earlier began with songs of worship, The National Anthem and Pledge of Allegiance. Lawmakers who have challenged the status quo of Roe v. Wade rallied the crowd with hopes of legislative strides. Each succeeding speaker’s message, though all passionate, was distinctly set within parameters of compassion and civility, as if the movement itself had matured and wrapped its arms around the many casualties – yes, the babies, but mothers and fathers, too – that such a history of atrocities had produced. In the press of humanity we stood, fully aware that we were partaking in a moment.

And then the trek began – about a mile and a half journey up Constitution Avenue to the Supreme Court and Capitol Building. A sea of people – some reports 600,000 strong – formed a wave of movement deep and wide. 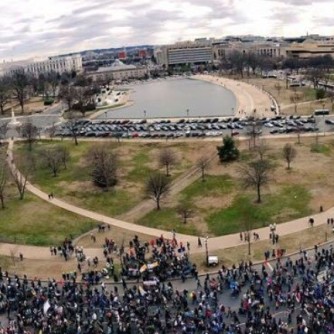 Donning colored caps, individual groups could be identified more easily, and it soon became evident we owed a debt of gratitude to our Catholic brothers and sisters for their belief in the sanctity of life. Priests, nuns and parochial students comprised a large constituency, their prayers petitions in the walk to the legislature.

Other faces, too, formed this underpinning of a movement more energized than ever before. The trio of grandmother-daughter-granddaughter marching together and the countless smiles of so many, many young people, all spoke to the generational value now placed on the pro-life message. 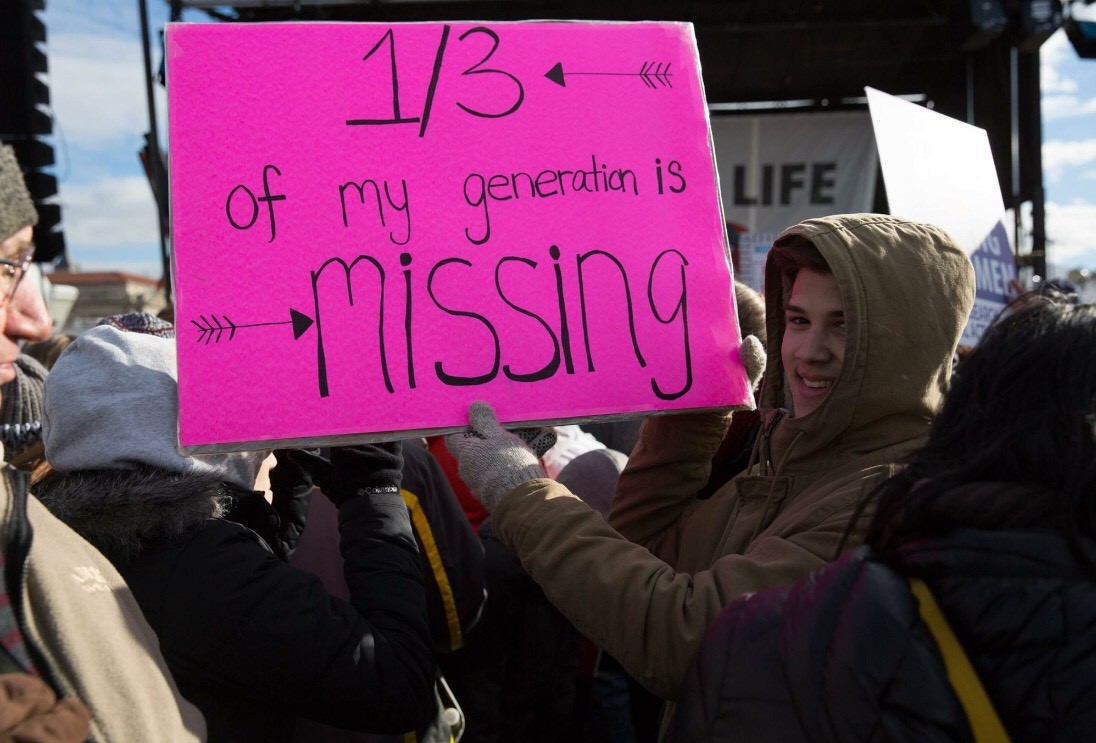 The faces of black, white, Hispanic and others – women AND men – holding signs, walking arm-in-arm, united for the unborn, for those individuals from a variety of backgrounds too young to stand for themselves.

The exception-to-the-rule faces, courageous mothers and children holding pink placards stating ‘My mom was conceived in rape – I love our lives’ caught my breath and filled my eyes with tears.

The ‘quitters’, professed former medical personnel who once assisted with abortions – their lives now redeemed by a message of forgiveness – boldly proclaimed the Gospel of peace.

And mostly, the victims, the 58 million sacrificed in our national holocaust, whose voices will never be heard and whose lives will always be missed. Their absence was the most prominent, yet their unseen faces the most cherished.

My son David is now a father. As daddy to our first grand baby, he understands fully what words failed to explain those many years ago. His very hands were the first to greet her as a thriving unborn, she crossed the threshold into this side of living. Someday I will tell her of my impulse escapade and the day I marched for life.

But that is not what is noteworthy. If my influence has merit, then may I be a role model to how a strong woman stands – for the unborn yes, but also in the many arenas where life is not deemed as precious. She stands for her convictions, and she stands with character. She may stand with others, yet she may stand alone. Ultimately, it is to God she must answer and from Him, she is graced to stand.